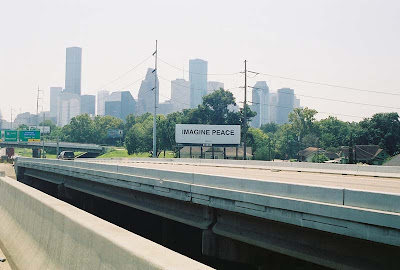 On the 5th of September in anticipation of the 10th anniversary of 9-11 and the opening of Positive Perceptions exhibition at Colton & Farb Gallery plus right before the first Houston Fine Arts Fair ten days later, the provocative artwork IMAGINE PEACE was unveiled on a commercial billboard along highway I-45 and I-10 East going into downtown Houston.

The Billboard is sponsored by Deborah M. Colton of Colton & Farb Gallery in Houston in conjunction with their Positive Perceptions exhibition that Yoko Ono is included in. With a size of 14 by 48 feet, the starkly visible billboard will be seen by thousands of commuters everyday bringing and unexpected art experience to the daily commercial environment.

Yoko Ono produced IMAGINE PEACE for New York City in 2001, responding to September 11th World Trade Center tragedy. Deceptively simple with its basic black and white palette the billboard engages the thoughts of the viewer on an almost subliminal level, inevitably provoking discussion of current events. At a time now when the news, movies and videogames often draw audiences into seductive worlds of warfare, Ono offers us a refreshing reversal of perspective.

Ono created her first billboard piece, WAR IS OVER! IF YOU WANT IT, with her husband John Lennon in 1969 and posted it in 12 cities worldwide to protest the war on Vietnam. The concurrent Bed-In for Peace events where John and Yoko received visitors while lying in bed during their honeymoon took place in Amsterdam and again in Montreal, making their wedding a celebration of hope for peace throughout the world.  Since then Yoko Ono has been a leader in the PEACE movement through her art and music in all continents, with many important projects about to unfold this fall also.

Deborah M. Colton had brought the IMAGINE PEACE billboard first to Houston at the same location September of 2006 at the time of the Gallery's WORD show.  "We are delighted to be working with Yoko One and bringing the IMAGINE PEACE billboard to the city of Houston again... the fourth largest in the country where the arts are strong and in the State of Texas that is  dynamic, entrepreneurial and vibrant,says Deborah Colton, founder of the Deborah Colton Gallery, now Colton & Farb Gallery in Texas.   "Ono's ability to subvert advertising for the purposes of art demonstrates the power that conceptual art can have.
The Positive Perceptions exhibition runs from September 10th to November 5th.  The Billboard and the exhibition reveal that art is free for those who will engage with it in the minds and their hearts.  Positive Perceptions, featuring such artists as Robert Indiana, Ultra Violet, Jonas Mekas and Texas artists McKay Otto, JD Miller and Philip J. Romano also, is about HOPE, LIGHT, LOVE...  and bringing more positive connectivity into our world's human condition.

As Colton states, "Yoko Ono's IMAGINE PEACE speaks on so many levels: peace in your own being, peace in your relationships or global peace. It comes back to John Lennon's song IMAGINE.  It's simple but powerful. It's not confrontational but it's about promoting positive change  This art piece like the others in this Positive Perceptions exhibition reveal that through our having the right perspective, we CAN all make a positive difference in the world, just by relating to each other in the right perspective."

Deborah Colton Gallery, which is the Colton Farb Gallery in Texas, is founded on being an innovation showcase for ongoing presentation and promotion of strong historical and visionary contemporary artists world-wide whose diverse practices include painting, works on paper, sculpture, video, photography, and conceptual future media installations. The gallery aspires to provide a forum through connecting Texas, national and international artists to make positive change.