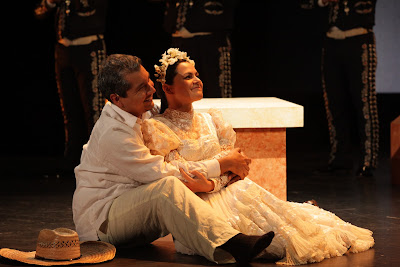 Houston Grand Opera debuted the world's first mariachi opera and after a successful run in Paris it returns home to Houston in March of 2013.

Literal had the opportunitty to talk to  Broadway director and author Leonard Foglia who wrote the lyrics for Cruzar la cara de la luna:

How did you come out with an idea like this and what were the challenges you encountered when you translated the immigrant experience into opera and mariachi music?

Anthony Freud, the General Director of HGO at the time, first had the idea to try to find a way to use mariachi music for the opera stage. It fell to me to come up with a story that would have meaning for the Mexican-American community in Houston. And I knew immediately that if the style of the music was to be mariachi then I had to steer away from anything overtly political and that the story being told would have to be an emotional one

The immigration is a phenomenon that has been present in the US for many years. However, there was always the doubt about the community´s capacity to appreciate this kind of cultural expression. What are your thoughts on this?
We are at a time in our history, here in the US, when the issue of immigration is front and center. Just a few days ago the President mentioned it in his Inaugural address. But part of the problem is that so many people look at it as just an ‘issue’. That’s why I chose to tell a very specific personal story of a family. I wanted to show the faces behind the discussion.

Will you be producing more shows of this nature?
With Mariachi? Right now nothing is planned. But I would like to.

Cruzar la Cara de la Luna set a new benchmark in operatic storytelling, why is so?
When I was first interviewing different immigrants about their lives and wondering myself about the use of this type of music I would ask – tell me what comes to mind when I mention mariachi music – and the answer that struck me the most was – home. So, I knew if we were starting from a place where there is already an emotional attachment to a style of music then we were the ones taking a step toward a community by offering something that already had meaning for them. We are not only saying that your story belongs up on this stage but so does your music.

You had a successful season in Paris. Can you share with us your experiences there? Did you go to any other place in Europe?
The most startling moment in Paris, which has no history of mariachi music and to my knowledge is not invested in the Mexican-American experience at all, came from a comment by one of the administrators of the theater. She decided to bring her children to a performance and with them was their Croatian nanny. When the administrator went to see how her children liked the performance she found that the nanny was crying. When asked why the performance affected her so much the nanny said, “It’s my story.”

What made you take the decision to come back to Houston?
We are hoping that those who missed it the first time round, and not just those in the Hispanic community, will have the opportunity now.