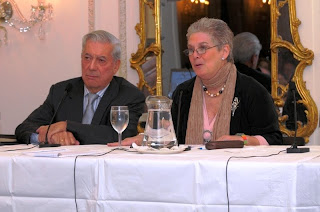 After we learned about Vargas Llosa´s Nobel Award, we decided to talk to Dr. Raquel Chang-Rodríguez who is an expert on Vargas Llosa´s oeuvre and a Distinguished Professor of Spanish-American literature and culture at CUNY. She was also the recipient of a National Endowment for the Humanities Fellowship (NEH), the Profesora Honoraria of the Universidad Nacional Mayor de San Marcos in Lima, and Miembro Correspondiente of the Peruvian Academy of the Spanish Language. We are happy to share this conversation with you.

Rose Mary Salum: We know you saw this one coming. Can you please talk about the significance of his award to a Latin American writer? What does an award like this means for the Spanish spaeking literary world?

Dr. Raquel Chang-Rodríguez: Mario Vargas Llosa has just been awarded the 2010 Nobel Prize for Literature. He is the 6th writer from Spanish America to receive it: he follows Gabriela Mistral (1945, Chile), Miguel Angel Asturias (1967, Guatemala), Pablo Neruda (1971, Chile), Gabriel García Márquez (1982, Colombia), and Octavio Paz (1990, Mexico). It is a tremendous and richly deserved international recognition of Vargas Llosa’s work. In addition, the award underscores the importance of Spanish, an international language, spoken in the Americas, Europe, the Philippines, and regions of North Africa, as a major literary language.

Since the publication of The Time of the Hero in 1963, Vargas Llosa presented himself as a daring innovator of style, capable of tackling a variety of themes and infusing them with fresh nuances. Thus this novel about adolescent rebellion and general indifference and corruption in “Leoncio Prado,” a military academy, turns into a critique of the abuse of power, into a study of human relations, including bullying, and its tragic consequences. Despite the fact that it was vilified in Peru ―several copies were burned in Lima― the novel signaled a new era for literature written in Spanish. It launched Vargas Llosa’s international career as a writer and situated his work squarely within the “boom” period during which Latin American literature gained international recognition.

RMS: Last week in the Berlin Festival, intellectuals and writers were wondering if Latin American literature was no longer in fashion. Vargas Llosa´s award could speak against this theory. However, it seems that the new trends are not favoring writers from Latin America. What is your opinion on that?

RCHR: Of course Vargas Llosa’s Nobel award disproves the theory that you mention. But let me offer another recent example. Granta, the prestigious British literary magazine that announces in periodic lists the best new writers of the English-speaking world, has ventured into the Spanish-speaking world. It recently proposed a new category called Best of Young Spanish-Language Novelists; it includes 35 writers and seven are from Latin America. This “incursion” of Granta into new linguistic territory signals an interest in what is being written and published in that language. If we add to this, the number of excellent authors from Latin America writing and publishing, and the works from the region that have been translated into other languages, all augurs for Spanish-American literature. I am sure that now in our area ―and by the way this includes Spanish-Americans living and writing elsewhere (New York, Los Angeles, El Paso, Madrid)― there are other Nobel winners in the making! 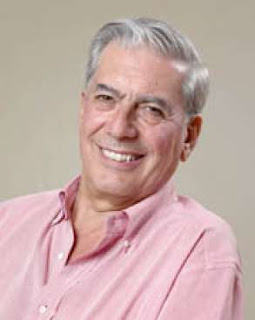 RMS: The Nobel committee awarded the Peruvian author “for his cartography of structures of power and his trenchant images of the individual's resistance, revolt, and defeat". According to your expertise, what else makes Mario Vargas Llosa such an outstanding writer?

RCHR: Vargas Llosa is a superb story teller, able to probe the human condition in singular ways. He has mastered the use of complex stylistic devices to present distinct voices in his fiction. Thus, when opening the pages of his novels the reader is able to enter into a complex world, urban and rural spaces often disjointed. However, the characters lead the way and the fictional world becomes our reality making it impossible to put down the book. Politics, power and violence, often go hand in hand in Vargas’s Llosa novels. He has a masterful ability to show how they intersect and can affect national life as well as the life of simple individuals. Nowhere is this more evident than in Urania, the main character of The Feast of the Goat (2000), a victim of Trujillo, the long-time dictator of the Dominican Republic.

RMS: Like many Latin American authors, Vargas Llosa has been politically active throughout his career, but gradually became disenchanted. His book La ciudad y los perros brought him international recognition. Can you talk about his political life and how it influenced his work?

RCHR:Vargas Llosa, an admirer of Albert Camus, feels that a writer has a social responsibility. Perhaps this is why he ran for the presidency of Peru in 1990. A Fish in the Water (1993), a collection of autobiographical essays, describes his failed attempt to become president; in this book he presents a cast of ambitious and questionable characters ―craving power for themselves― recognizable in many Latin American countries. This fascination with politics is a recurrent theme in his fiction. For example, The Real Life of Alejandro Mayta (1984) describes from several perspectives the changing personality and ideology of a revolutionary while Conversation in the Cathedral (1969) recreates the difficult times of Manuel Odría’s dictatorship in Peru. He also uses humor and parody to mock the stifling military bureaucracy as in Captain Pantoja and the Special Services (1973). However, as proven by The Notebooks of Don Rigoberto (1997) and The Bad Girl (2006), his fiction has an important erotic vein.

I eagerly wait for 3 November 2010, the launching date for Mario Vargas Llosa’s latest novel, El sueño del celta. And I look forward to continue reading the works of this indisputable master of the Spanish language.

RCHR:I began reading Mario Vargas Llosa’s novels and short-stories since the early sixties, and later his theatre and essays. I recognized almost immediately, his singular narrative voice. As Vargas Llosa developed as a writer and tackled more complex subjects with a self-assured hand, I realized that he was a master writer, destined to receive international recognition.

We share common interests, particularly in Inca Garcilaso de la Vega (1539-1616), the first Spanish-American writer born in Cuzco, Peru. In Fall 2009 we participated in a symposium honoring Inca Garcilaso. Just last week, October 1st to be precise, we presented at the Americas Society in New York City, the book that collected the papers from the symposium, including a major essay by Vargas Llosa and an interview with him. Several days after he was awarded the Nobel Prize. What an honor for Peru, his native country, for the Spanish-speaking world, and for all lovers of good literature!!!